In the world of Vitamin D3, we are seeing a substantial difference in market demand for food versus feed grade products. Consumption of Vitamin D3 food supplements is trending upwards, especially as we enter the winter season. The British government is offering 2.7 million people Vitamin D3 because lockdown measures have kept people inside, increasing the risk of vitamin D deficiency. Recent studies have linked low vitamin D levels with an increased risk of COVID-19 infection, though it remains unclear whether Vitamin D supplementation is actually protective against the disease. At the same time, the feed grade additive is continuing its slow price decline over the last 6 months. Prices are declining by single digits on a weekly basis, pointing to low demand that is not reflected in the human nutrition market.

Since the 1950s Menhaden has been a critical source of protein for chicken and pigs, particularly in the East Coast of the United States. In the late 20th and early 21st centuries, we saw another shift in the use of these products. Most of the fish meal went as feed to the lucrative and rapidly expanding global animal aquaculture industry, while most of the fish oil went to the dietary supplements industry as consumers recognized the cardiovascular health benefits of Omega-3 fatty acids. This increased demand has resulted in Menhaden levels dropping to just 10% of what they were in the 1950s, and a 3x increase in price since the late 20th century. 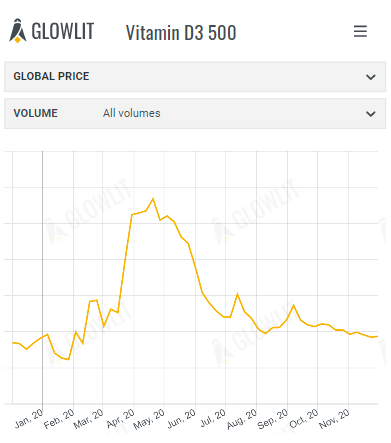